I have many P-64's and noticed that with the Silver Bear JHP I would have a feeding problem when I have fired almost 200rds consecutively within about a 30 minute time period. I have never had this happen with any of my P-64's with less than 150rds through them. So I do believe that the weapon is solidly reliable but due to the size of it I think that the overwhelming carbon build up when I got close to 200rds was too much for that many rounds consecutively. The round that jammed was 2/3 of the way inside the chamber but needed a little "forward assist" to get the bullet/slide all the way seated forward in order to fire it. I believe that with the new stronger recoil spring and also removing slightly with dremel polishing the feed ramp (reducing forward inertia) and also polishing the inside of the chamber all around will keep the area a little more open to allow for more tolerance of carbon build up since not only is the area slick and polished but a tad bit more open around the cartridge but not too much to allow proper blow back operation. Here is a photo after wards 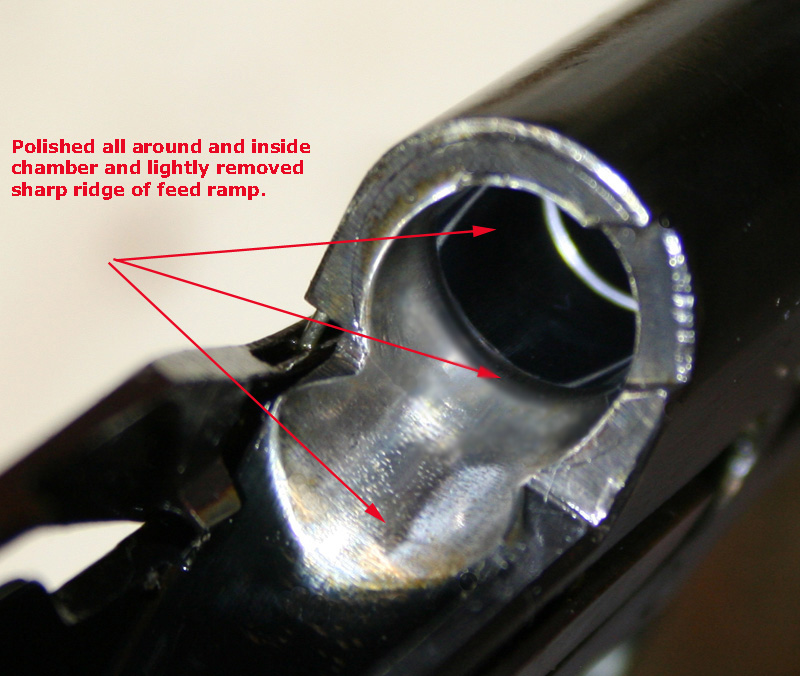 Nice job! What specifically did you use to polish with? Is there a dremmel attachment with something like jewelers rouge or what. I ask because I recall reading a thread that someone else was also polishing the feed ramp and it was suggested that once they dremmel or file it to polish out any fine lines to be as smooth as possible. I'd be afraid that I do more damage than good!
Top

It's a blowback pistol, guys.

Some powder is going to get on the chamber walls and deposits will build up.

The deposits are what need to be removed. NO METAL!

Remove the slide. Put a rod through the barrel with the handle at the muzzle. Screw a brush on, pull the bristles inside the chamber, twist the rod shaft three complete turns in the direction that doesn't unscrew the brush, then pull it out through the muzzle. Put the rod back in without the brush, screw a patch holder on and repeat the action. Replace the slide and continue to shoot. Upon completion of the session, clean the pistol in the normal fashion.
Top

I used a dremel attachment so I can get in close with an attachment hard cotton round polishing wheel with jewelers compound and removed the sharp edge at the top of the feed ramp and around the sides and on the inside of the chamber. No you are not removing that much metal in fact barely visible but inevitably by polishing you are removing minimal amount it will not hurt anything and then you will insure positive feeding even if the gun is dirty. A buddy of mine is in Iraq and carries this as a backup gun (ankle holster) and having the gun polished that way will give him more peace of mind if it isn't perfectly clean. I fired 200 rounds today for the second time and no trouble with feeding jhp. Do what you want but I didn't use to be able to fire more than 150 before I had trouble. Most custom guns makers practice this and I promise you that having a highly polished feed ramp is not contraindicated by anyone I know.
Top

NICE JOB!! Anyone know where this may be offered as a service??
Top

just a side note : if you soak the felt wheels in water for several days in advance, it will keep the felt from disintegrating and burning up. it saves the felt and holds it together better. G
Top

Thanks for the information on soaking the felt bobs!!! I have had these "burn" on me in the past and never knew what to do to stop that. Very good post!

When I got my CZ-82 and took it to the range, I had not polished the ramp. I had the first few bullets stop just short of locking up. A touch to the rear of the slide and the cartridge chambered fine. After shooting about 25 rounds, no other problems. Before cleaning the pistol, I polished the ramp and so far not another FTF.

Any gunsmith can do this for you, but will probbly cost you about $20-25. My recommendation is to get a piece of round dowel where the diameter of the rod fits the radius of the ramp. Buy a small tumbe of Flitz or other polishing compound at the local gunshop or Home Depot. Wrap a piece of cloth around the dowel, put some Flitz on the cloth. Work the dowel up & down & around on the ramp until you get all the bluing removed and the surface is shiney. Just be careful and follow the contour of the feed ramp. You won't remove hardly any metal, just polishing the surface.
Top

Good tip, Garry, on moistening the felt before polishing. Dremel has a cleaning/polishing kit that's about $11 that contains many felt disks, wheels and a bullet shape that I like for the ramp, plus it includes the 421 polishing powder (essentially jeweler's rouge), so the kit is a better overall deal than buying the individual components. I routinely polish the ramp of any new milsurp pistol that I buy - especially the P-64 since many of us got them as unfired.
Thanks again.
Top

Polishing the feed ramp is an easy fix for increased reliability. Some pistols even need the bottom edge of the feedramp filed a bit. But I would not polish around or inside the chamber. The cartridge swells inside the chamber and seals gases to enable the blowback operation. I don't want a slippery chamber, or one that's even slightly enlarged.
Top

Nbender , i totally agree , a good cleaning in the chamber sounds a lot better than risking it not sealing the gases (by opening it up more) , and will easily change the timing of the blowback operated actions.
uuuh ... from what i hear. it makes sense. i am sure that they can be reamed out in order to "tune" them, but then that would limit that gun to just that ammo type. These are good by design and over and over you'll hear about how a good cleaning will "fix" them right up ! Polishing the feed ramp is an obvious update. the smoother the better, you can easily remove material ,whereas it is much harder to replace it. When in doubt, give a "smith" a shout! It is an easy procedure and anyone can do it ,tho. G
Top

If it means anything, polish it. The smoother the better for feed. I polished my .45 and have not had any feed problems since. Good Idea for my P-64. Thanks for the reminder and info. ;D
Top

At my work we use a grease based compound to polish knife blades. Would that work as well or is there any reason for specifically using jewelers compound for the polishing job? With a good follow-up cleaning I'm thinking that the compound we use at work might do the job well. It sure does a bang up job of putting a mirror finish on knife blades.

dus'
yes the gray or the white will work a lot better than red rouge, rouge works best with metals , like gold . silver . brass , copper

NORMSUTTON wrote:dus'
yes the gray or the white will work a lot better than red rouge, rouge works best with metals , like gold . silver . brass , copper

Thanks. Awesome. I'll grab a piece of the white then and do her up tomorrow. I'm looking forward to playing with it.

Ok, I just finished polishing the feed ramp and man, that white compound from my work was awesome. Bright, mirror finish on the ramp. I didn't have any trouble with burning the wheel though I did use a very light touch with it and plenty of compound. Same technique we use when doing blades at work. Let the machine & product do the work. Anyway, I'm really happy with the results. Cleaned her up good and she's ready for action once again. I don't have a digicam or I'd take a pic of it to post. Ah well. There is the camera phone but those pics are pretty crappy.