The 19 pound hammer and 20 pound recoil spring combo from Wolff did a whole lot to tame this little beasty. Now I'm just waiting for the Marschal grips to arrive, and I'm gonna have a sweet little EDC. I've minimized the notorious slide bite by adjusting my grip. I wrap my two main fingers (but not the trigger finger) around the grip, then loop my pinky across the base. Then I cup it in my other hand like I would a snubby. Seems to work pretty good.

I've carried it in several different rig set ups, but it seems to work best for me as a pocket gun. It fits perfectly in a Blackhawk or Uncle Mike's #3 holster, and if I carry it in my some of my trousers with bigger pockets (i.e. BDU or cargo shorts) it is really easy to deploy and return to pocket. I have a little leather pouch that I originally made to carry a couple of spare TCP mags, and it happens to fit my spare P-64 mag and little NAA Pug (.22 WMR) that I carry sometimes as a BUG.

Taken together, they make for a really handy pocket carry set-up and have replaced my little TCP for my main carry gun. It packs a bit bigger punch, is a whole lot more accurate, and just feels better. (I prefer a gun with a bit of heft to it). It prints a little more, so I'll still carry the TCP when I need something really discreet.
Top

I have a nice OTB, and an IWB as well. Carry at 7 o'clock. 2 spare mags.
Great carry gun!
"For the Founders, the right of the citizen to be armed-they never imagined a world in which they would be disarmed for the supposed benefit of preventing access to weapons by madmen."
Top

It is indeed a great carry gun. It might have been a poor concept for a military/police duty pistol, but it excels when it comes to concealed carry - assuming you think that 9x18 will give you enough juice, and assuming you make some minor modifications to it.
Top

Good enough for me!
Lot of practice, it is full of finesse, fulfillment, and most of all FUN!

Sent from my XT1080 using Tapatalk
"For the Founders, the right of the citizen to be armed-they never imagined a world in which they would be disarmed for the supposed benefit of preventing access to weapons by madmen."
Top

Agree to all. Save for pocket carry.
My rides,

Let's try that pic again shall we?

Do not trust pocket carry, ever. too hard to get at quickly and a large number of other possible troubles. This is my preferred carry method. Outbags holster on Amazon for $26.00. And fits like it was made for the gun which, ironically enough it say's it is.

Ok, I did not realize these 2 did not post. So here are 2 other views of my outbags holster. Course these are a little old cause my P-64 now wears Russ "Polish iron's" V05 grips and I am glad for it. have not shot the gun with them yet but carrying with this set up is nooo problem.

Wow, I have that exact holster from outbags, it's very nice and holds my little dragon very firm.
Ps, I now have russ's polish irons on mine too, as of today.

What a great carry arrangement
Top

this is my P64 and holster
Top 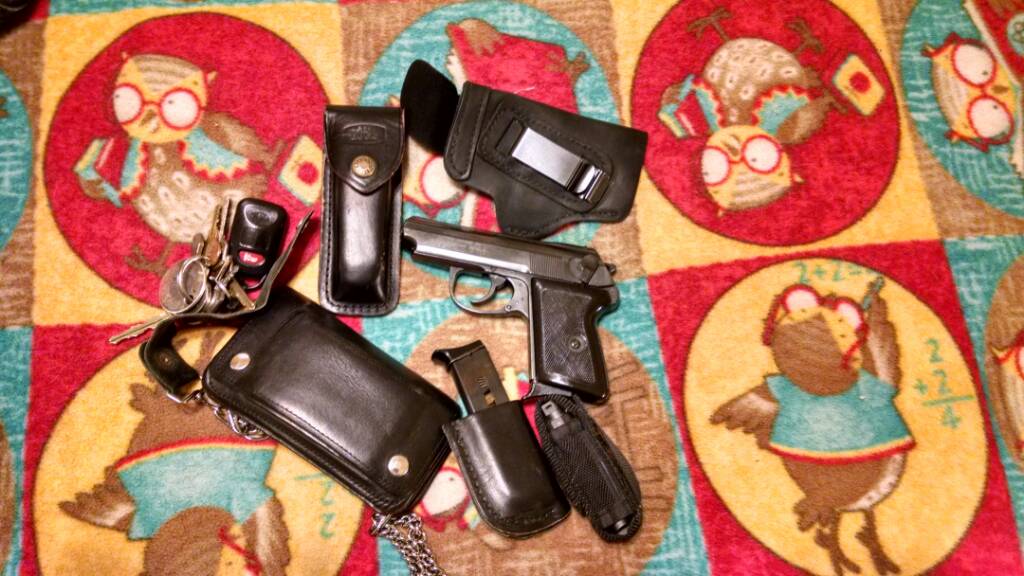 Sent from my XT1080 using Tapatalk
"For the Founders, the right of the citizen to be armed-they never imagined a world in which they would be disarmed for the supposed benefit of preventing access to weapons by madmen."
Top

There are some really nice carry rigs shown here. I really do like the P64, and it's edged out my G42 as my preferred EDC.

I have a unique circumstance that limits me to smaller guns like the P64 - my wife. When she was a kid, she was playing with friend. Her friend's brother found their dad's pistol. They played with it, and her friend accidentally killed herself with the gun - and she witnessed it. The brother would use the same gun to kill himself about 15 years later. Not surprisingly, she is very anti-gun and doesn't want me carrying any of mine. No amount of reasoning is ever going to make her back-off on this and change her mind. So, I promised here I wouldn't carry it.

Unfortunately, that's a promise I cannot keep because I have a duty as a husband and father to protect my family. We live in dangerous world, and as a former community supervision officer and current psych tech at the Tarrant County Jail I've come across too many people who would just as soon harm you as look at you. I've seen too much to keep that promise. So, I limit myself to smaller handguns that can be pocket carried or carried IWB and not be easily detected during the course of a hug. I love my family too much to keep that promise but respect my wife too much to rub it in her face, so I carry as discretely as possible. This requires that I limit myself to P64 or G42 sized guys, and carry the best SD ammo I can find. I've been doing this for a while now, and so far it was worked out well enough. I've certainly reached a point where I won't consider carrying anything bigger because they're just too bulky for me, and I've done too much research into ballistics to believe that a 9x17 or 9x18 round is ineffective. No, they're not rhino slayers but they get the job done on human predators - most of whom will be just as deterred by a 9x17 or 9x18 as they would be by a 9x19 or .45ACP.

MY wife works as a district manager for Long John Silver's, and she has some stores in pretty crappy locations. Twice somebody has attempted to car jack her. For a while, back when I was a community supervision officer, I had gang members casing the house and she started to notice the strange vehicles on the block. Not sure what they were up do, but they stopped doing it after I started leaving Guns and Ammo magazines out on my desk - conveniently turned to a page with a full color advertisement for premium self-defense ammo, and placed in such a way that they were bound to see it when they came in for office contacts. I wouldn't say a word about it during the office contact, but I knew that they would see it cuz I could see their eyes darting over to look at it.

After the attempted car-jackings and house casings, my wife asked me "You aren't carrying are you?" There was a look in her eyes that let me know that this was her way of letting me know that she was no longer as uncomfortable with the idea as she used to be. I played along with the game and told her that I wasn't, and she said "good." (She can read me as well as I can read her, I suspect). She's stubborn and is constitutionally incapable of ever admitting that she was wrong, so this game will probably continue forever. I'm cool with that, because I don't have the need to prove that I am always right or play "I told you so." My ego or concept of penis size is not tied into the size of the gun I carry or how I carry it, so I just continue to discreetly carry smaller framed guns and keep it to myself here in the house.

The P64 gives me what I need, and the only way I can improve on it is to lay my hands on a third factory magazine. The guys who designed this thing might have fallen short of the mark when it comes to a military/police duty pistol, but they created a handgun that is perfectly sized and chambered for a round that suites my self-defense needs.
Top

I told Mrs Curly long ago that I would be the one to decide where and when I carry.

Having a CCW for 40 years I never carried that much as I never saw the need. It's just been within the past 10 years that I carry as much as possible after seeing all the azz hats in the media that are going off the rails especially in the past 5 years.
Laugh Hard and Often.

, and the only way I can improve on it is to lay my hands on a third factory magazine.

I ordered two mags more yesterday. They shipped today. $24.95! New owner/friend of mine couldn't find any either.
http://www.keepshooting.com/catalogsear ... =p-64+mags
Russ...
Oh and a shameless plug to improve handling of your P-64.
https://flic.kr/s/aHsku4qp5p